When should you wear a tie and when shouldn't you? In business a necktie is a must. But also in your free time there will be occasions where a tie might be required.

This includes first of all family parties such as weddings, baptisms, birthdays or anniversaries. Whenever this takes place on a grand scale, a tie is appropriate. Not only to underline the festive character of the occasion but also to show respect towards the host/ess and the effort s/he had made.

A sad occasion, such as a funeral, requires a black tie or a fine, dark pattern that appears from far as dark gray. Other occasions a tie would be appropriate: invitations for extravagant dinner parties at strangers or acquaintances, visit to a fancy restaurant, bar or cigar club, as well as an evening at the theater or the opera.

Other reasons would be business-like occasions such as a talk at the bank about a loan, when buying a car, or when having an appointment at the lawyer or notary. Mens Ties signal competency, sovereignty, and even creditworthiness, and thus are worthwhile to wear for certain occasions. If the tie is required for a date, it depends on where it takes place. If you plan a romantic candlelight dinner, it would definitely be the cherry on the top!

But which tie for which occasion? The selection seems to be innumerable at first sight. But when looking closer, one finds basic patterns, into which each design can be fitted without difficulty. Each of these basic patterns has a certain meaning to it, the same as every color has a fashion statement. Whoever keeps this in mind, can make the necktie a trademark of his own personality.

The most important basic patterns and their effects 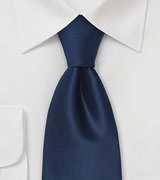 Solid colored ties – printed or woven – are available in almost every shade and various weaves. At any rate, the person wearing solid colored ties will have no problem in combining them with suit and shirt. This does not mean that choosing a solid colored necktie implies being insecure in fashion matters – on the contrary. The solid dark blue necktie of Jacquard was the understatement tie of fashion icon Gianni Agnelli. At Ties-Necktie we carry a large selection of Solid Color Ties
What about the dress code for these ties?
Office: Definitely, e.g. navy blue or claret
Fancy dinner: yes, also in brighter colors
Festivity during the day: Yes, e.g. in nice blue and red shades
Good weekend-look: Yes, e.g. in auburn or green 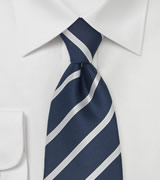 Predominately of woven silk, as regimental tie or with fantasy stripes, striped ties offer many possibilities. A Striped tie signal that the person wearing it has a sense of the Anglo-Saxon clothing tradition, but at the same time allows for the more conservatively dressed man to show profile by choosing bright and daring color combinations. At Ties-Necktie we carry a large assortment of Striped Ties
What about the dress code for these ties?
Office: Yes. For important meetings rather muted color combinations
Fancy dinner: yes, all colors are possible
Festivity during the day: Yes, but more muted shades
Good weekend-look: Yes, in country-like combinations with green, claret, brown or yellow.

All over patterns and motifs 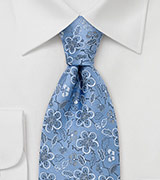 All over implies that patterns and motifs cover the tie equally, e.g. tiny fish. Altogether, all over patterns always appear a bit uneasy, and contemporaries often think of these ties as poor taste. But it really matters what design the tie shows: undressed women or dollar symbols probably appear less sophisticated than a design resembling an animal or flower. Especially ties with intricate and small floral patterns have gained much popularity recently. We also invite you to view our selection of: Ties with Motifs
What about the dress code for these ties?
Office: Yes. Best would be on dark blue or claret background.
Fancy dinner: yes, also in bright colors.
Festivity during the day: Yes, but more subtle background.
Good weekend-look: Yes, best with green or brown background.

A classic you can buy with all (Polka) dot sizes – as printed or Jacquard. Rule of thumb: the larger the dot the more daring. Classic designs are white dots on dark blue background or on bright red, for the warm season also little white spots on pink or bright yellow. But a lot more combinations are possible since the dots do not necessarily have to be white. Recently many necktie designers have played with small polka dot patterns multiple colors. Click here to see our selection of: Polka Dot Ties
What about the dress code for these ties?
Office: Yes. E.g. dark blue or black with white spots.
Fancy dinner: yes, depending on the season also with a lighter background color.
Festivity during the day: Yes, but only fine dots on dark background.
Good weekend-look: No. 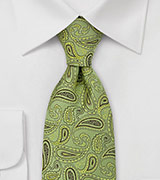 This necktie is considered typically British, but the Paisley pattern actually originated in the orient, The wild swirling fertility symbols have the best effect on powdery-matt silk. For business purposes, these patterns are only suitable in subtle shades and business-like colors such as claret or dark blue.
Thus, Paisleys in strong brown green or yellow shades will go with a sports jacket. See our entire selection of Paisley Ties
What about the dress code for these ties?
Office: Only in quiet designs.
Fancy dinner: Yes, also with strong red and yellow shades.
Festivity during the day: Yes, but only in moderate colors.
Good weekend-look: Yes, because this is the actual domain for this type of tie. 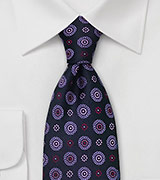 Some are so artfully woven that they seem to be three-dimensional, others seem to flicker vertiginously. Such deluding effects makes geometrical ties an eye-catcher, but one should not expect one’s associate at a business lunch to be too hypnotic. Most stylish are those patterns that appear unobtrusive on first sight and reveal their finesse only when having a closer look .
What about the dress code for these ties?
Office: Yes, but only with moderate patterns.
Fancy dinner: Yes, but only also unobtrusive variants that will not distract the associate.
Festivity during the day: Yes, e.g. with silvery background.
Good weekend-look: No.

They vary from the Hawaiian tie with palm tree over to the sunset popular in the forties to the souvenir brought from the Louvre with a Mona Lisa smiling at you. Ties with motifs are available for all tastes ranging from trash to art. As opposed to all over ties, the neckties with a motif on them are usually dominated by one huge single image that is not repeated. Anyone who likes this kind of tie should choose it carefully. A gigantic cactus in garish green is definitely fun, in business it would rather provide for sceptical looks.
What about the dress code for these ties?
Office: Rather not.
Fancy dinner: Yes, but only with not too unobtrusive varieties
Festivity during the day: No
Good weekend-look: No. 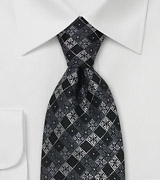 As for fantasy patterns, the designer can really rage himself out – floral, organic, floating, small or huge. Thus, the term “designer tie” has a negative connotation amongst friends of the classic wardrobe. Not without good reason, because that is what some designers want most: to cause a stir with his design. But that is just what the conservative tie wearer wants to avoid.
What about the dress code for these ties?
Office: Not in conservative professional fields.
Fancy dinner: Yes, everyone to his taste
Festivity during the day: No
Good weekend-look: No. 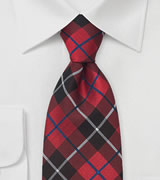 A term of wide comprehension since there are hundreds of them. Nevertheless, everybody knows at once what is meant: a tie in kilt-design. The Italians being crazy about everything British, this one is a classic, which will naturally be worn with a dark gray business suit. In the U.K. this would be a faux pas because Tartan ties are reserved for the country life. In Germany a tie in Tartan design would signal sense and courage for individuality
What about the dress code for these ties?
Office: Yes, but only “quiet” Tartans, e.g. Blackwatch.
Fancy dinner: Yes, could be in stronger colors.
Festivity during the day: No
Good weekend-look: Yes, best in earthy natural tones.

What is sauce for the suit is sauce for the tie. Thus, we find many sports jacket designs also on ties, often as Jacquard. Since most of them are quite fidgety, they are mainly suitable for solid colored shirts and ample patterned suit fabrics. A classic example would be the silvery-gray Prince-of-Wales-Check tie combined with a white shirt and dark grayish worsted yarn fabrics and pinstripes.
What about the dress code for these ties?
Office: With blue, claret or silvery-gray background and small patterns.
Fancy dinner: Yes, in similar colors as for the office.
Festivity during the day: Yes, e.g. a fine Prince-of-Wales-Check or a shiny hound´s tooth check.
Good weekend-look: Yes, but on brown or green background with larger patterns.