George W. Bush is the 2nd Worst Dressed President of All Time 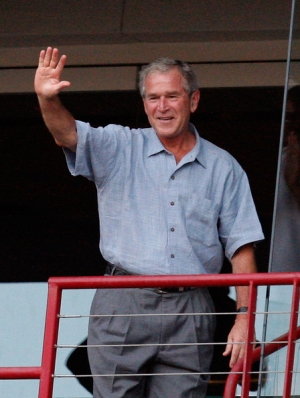 It’s no secret that many people throughout the United States and the rest of the world have a whole host of negative things to say about the presidency of George W. Bush. Indeed, “W” (as he is often referred to) had a tumultuous presidency that was rife with war, economic upheaval and other issues. Even if he had been the best president in decades, however, there’s no getting around the fact that he was most certainly one of the worst-dressed individuals to ever entire the White House. Bush may have been able to pull his act together on occasion, but for the most part he will be remembered as having terribly poor fashion sense that did nothing but push him even further in the wrong direction. The following aspects of George W. Bush’s style help to highlight exactly what went wrong, and how you can avoid letting them enter into your own look. We put Mr Bush on the second spot of our List of Worst Dressed US Presidents.

Short-Sleeve Button-Down Shirts
If there’s anything that sets George Bush’s appearance apart from that of presidents who came before him and were more sharply-dressed, it’s the fact that he continuously seemed to have a penchant for wearing short-sleeve button-down shirts. The short-sleeve button-down is almost never an effective piece, as it typically makes one look more like Dilbert than anything else. This is especially true when these shirts are unfitted, as they tend to end up being seas of material that swim all over whoever decides to wear them. For best results, short-sleeve button-downs should be left in the closet (or at the store, for that matter), and Bush failed to take this rule into consideration.

Horrendous Vacation Attire
Being the president is a hard, stressful job, and everyone who fills the role deserves a vacation from time to time. Bush was well-known for taking vacations during critical times, yet it was perhaps his sense of fashion while away from the White House that served to be the biggest travesty. Think socks that came almost all the way up to his knees paired with shorts and sandals, and you’ll have a pretty good ballpark idea of how Bush would dress while on vacation. Add to this the poorly-matching shirts he always seemed to choose (don’t forget the clashing baseball cap as well), and it’s a wonder how he ever thought these ensembles would look good in the public eye.

Takeaways for the Modern Man
There’s no getting around the fact that it can get hot out there during the warmer months of the year, but this is no reason to get sloppy in terms of your approach to fashion. Stay away from geeky short-sleeve button-ups at all costs; they don’t do anyone any favors. If you’re going on vacation, you’ve got to remember that it’s not a call to throw fashion by the wayside; stick with smart, light summer clothing that will make you look as if you aren’t trying to turn any heads; you’ll be far better off than you would be if you took the alternative route.