The Story of the Trench Coat in Mens Fashion 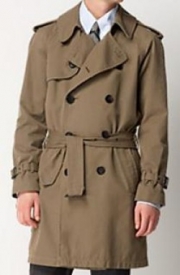 So, it’s not the summer anymore. And, in some places, it feels far more like winter than it does fall. The days are shorter than they were even a week ago, and soon, they’ll be shorter still. And then, the weather will change for the far worse, if it hasn’t started to already. Why all this maudlin bullspit? Why not a nice article about socks or something? Because, like it or not, you’re going to be out one day on the way to the office, and WHAM; downpour. Then straight to your desk, where you’ll sit like a soggy lump, steaming and dripping on the carpet, and ruing the day man created rain. What could have saved you from this ignominious fate? The answer is being better prepared by dressing according to the season. One clothing item in particular has celebrated much popularity during the colder months of the year. I am talking about the Trench Coat. The trench coat has been around, virtually unchanged, for nearly a century. Oh, and man didn’t create rain either.

Sadly, many men don’t wear trench coats much anymore, despite the fact that they’ve been an enduring part of men’s fashion for over 100 years. The original trench coats were not designed for use by the general public, however. Being inspired by the topcoats that men had been wearing for centuries over their suits and formal attire, one Thomas Burberry designed the first trench coat for use by British Army officers in the Second Boer War. Of course these coats, originally called Burberry Coats as there was a lack of trenches in the fight against these underequipped South Afrikan rebels, differed in many important respects from their inspirations. Whereas topcoats are usually softer and made from plush wool, the Burberry coats were entirely utilitarian in design, and fashioned from gabardine; a new fabric invented by Thomas Burberry himself. The gabardine was (is) waterproof, relatively warm, and highly durable, while still keeping the wearer ventilated so as not to overheat on the attack. As was mentioned before, these coats were only available for officers, and were not part of the normal British uniform. This meant that the coats were not provided by the war department, and had to be privately purchased before finding their way to the field. As usual, the enlisted man had to suffer.

Then, there was World War I; and there were trenches, lots and lots of trenches. What started out as a war of movement, quickly found it’s equilibrium in central France, with two titanic armies facing each other from vast trench networks, and often in freezing, knee-deep mud. In short, the perfect environment for the trench coat (now correctly named). In the intervening years between the Second Boer War and 1914, Burberry had introduced some improvements to his invention. Firstly, and perhaps the most important, each coat now came with a warm wool liner that could also be detached and used as a blanket. Burberry had also added D-rings (the trench coat’s famous belt), and epaulettes so that officers could attach their badges of rank without damaging the fabric of the coat proper. With these new features, the trench coat was an even bigger hit than before, and the British War Board ordered close to half a million of the garments. At the front, the coats were highly coveted items among the soldiers. No, they wouldn’t stop a German machine gun bullet, or protect against mustard gas, but they would keep you relatively warm while you waited to go ‘over the top’. American soldiers were late on the war’s scene, but when we got there, the trench coat was in full effect, and many of the soldiers fell in love. These same men brought their prized coats back to the states with them, where they made a splash here (the coats, not the men. Although, they did too. The men, not the coats). This included men who went into the fledgling movie business, and introduced the fashion en mass to the general public.

Men like Humphrey Bogart, who made the trench coat all but immortal, and as private dick Sam Spade, nailed the coat into the pages of fashion iconography. Bogart himself was actually in the Navy, but I think the example still applies, and, if you think about it, adds another layer of depth to the Sam Spade character. After this, the trench coat became enduringly popular with all walks of men, who wished to look stylish while at the same time keeping warm and water resistant.

As was mentioned before, the design of the trench coat has changed very little in the over 100 years that it’s been around. They’re still mainly made from the same material, that is gabardine and other cotton fibers. While these fabrics don’t quite have the heat retaining properties of wool, they can be easily waterproofed. Of course, wool is also popular trench coat fabric. Today, one can also find coats made from leather. Traditionally, as they were made for the army, the color was uniformly khaki. Of course now, they come in a wide variety of colors, as well as patterns. Same with the number of buttons, and their placement. A traditional trench coat is double–breasted, thereby ensuring a watertight seal against the elements, but they are also available in single-breasted configurations.

There is one word of caution concerning the trench coat, however; be careful how they fit. A smaller man needs to be careful to have a coat that fits properly, so as not to look swallowed, or imprisoned by fabric. Conversely, a large man may not wear a coat too small for his frame, so as not to look like a giant. Other than that, there is almost no false move one can make with a stylish trench coat on your side. Except, of course, no owning one. Like I said, weather is on the way, if it hasn’t gotten there already, and you will look quite the fool braving the elements without a sturdy trench coat. They’re dapper. They’re stylish. They’re water resistant. They make almost anyone who wears on look important and mysterious. So, what’s to lose? Get a trench coat today, and be ready for anything.

Other Related Articles:
A Guide to Mens Blazer Jackets